Qatar Airways Is a national carrier owned by the Qatar state, established in 1993 and relaunched in 1997, under the mandate of his highness, The Emir, Sheik Hamail Bin Khalifa Al Thani, who outlined the vision to make Qatar Airways the leading international airline with high standard of service and excellence.

The Qatar airways has been and still managed under the leadership of His Excellency Akbar Al Baker.

Akbar Al Baker is the Group CEO of Qatar Airways and Secretary-General of Qatar National Tourism Council, also served as one of the lead developers for Hamad International Airport.

Born in Doha, he is a graduate in Economics and Commerce and worked at various levels in the Civil Aviation Directorate before becoming Qatar Airways’ Group Chief Executive in 1997, has managed to take the company to a great height as it is recognized as a leading international airline in aviation global.

Emerging as a leading force in regional and global aviation and reaching more than 100 destinations, Qatar airways has won several awards, from skytrax world airline award, ranging from:

Qatar Airways is the first airline in the world to meet and exceed ICAO’s Global Aeronautical Distress Safety System (GADSS) requirement for aircraft location management, through a partnership with FlightAware and Aireon, LLC using its GlobalBeacon technology, which provides a “minute by minute” tracking capabilities.

The airline’s annual revenue has increased by 10.4 per cent in the fiscal year 2017 (April 1st 2016 to March 31st 2017) revealing a 21.7 per cent year-on-year net profit increase. Global Network and Expansion From Qatar Airways’ hub in Doha, the country’s capital, the airline has developed a global network of more than 150 destinations, covering Europe, the Middle East, Africa, South Asia, Asia Pacific, North America and South America with a modern fleet of more than 206 passenger and cargo aircraft.

During 2015, Qatar Airways has extended its route network to more than 150 destinations including flights to Amsterdam (The Netherlands), Zanzibar (Tanzania), Nagpur (India) and Durban (South Africa). 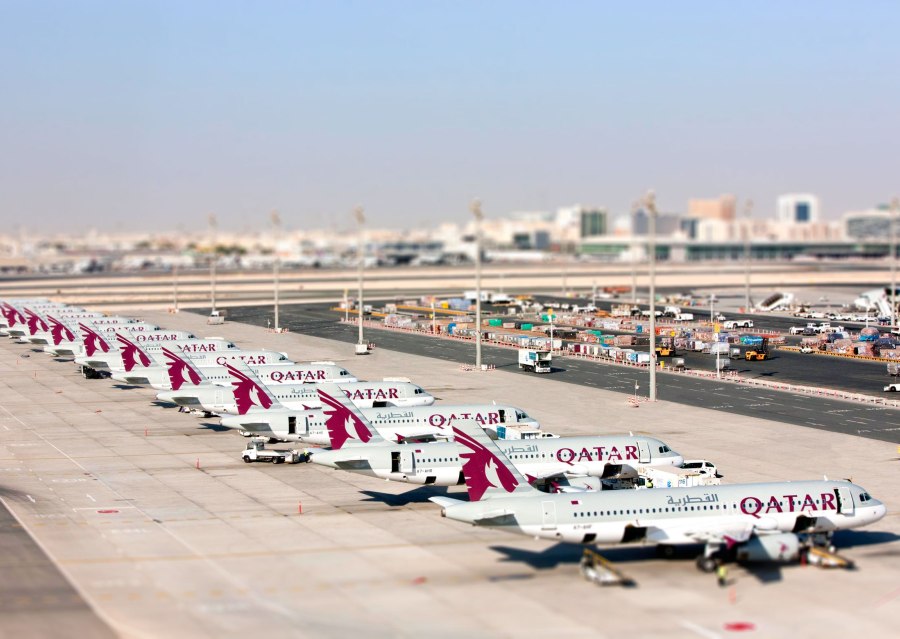 Qatar airWAYS operates more than 206 aircraft to more than 150 destinations worldwide. Qatar Airways has one of the industry’s youngest fleets with an average aircraft age of five years. The Qatar Airways family includes several different Airbus and Boeing aircraft types – the long-range Boeing 777 passenger and freighter aircraft, the Boeing 787 Dreamliner and 747F, Airbus A340, A330, A350, A380, A330F freighter, A321, A320 and A319. The latter A319 includes a corporate jet version. With the delivery of the A350 aircraft in December 2014, for which it was the global launch customer, Qatar Airways became the first airline in the world to operate every family of Airbus’ modern airliner portfolio.

On 15 January 2015 Qatar Airways deployed its newly-received, world-first, Airbus A350 XWB aircraft, on the Frankfurt route. In 2016 became the first airline to fly the A350 to three continents.

Qatar Airways was one of the launch customers of the twin-deck Airbus A380-800 ‘super jumbo’ – the world’s biggest aircraft capable of carrying 517 passengers in a luxurious configuration. Qatar Airways has ordered 13 A380s with the first aircraft delivered in 2014, to date it operates 6 A380s. The airline was the Middle East launch customer of the Dreamliner, Boeing’s 787 aircraft. The company also operates corporate jets, including Bombardier Challenger 605s, Bombardier Global 5000s and a Global Express XRS, for its executive subsidiary Qatar Executive, launched in 2009. Qatar Executive, the largest G650ER operator in the world, continues to expand its operations, placing an order for 30 Gulfstream business jets at EBACE in Geneva during May 2015. The 30 firm orders and options are a combination of Gulfstream’s new wide-cabin aircraft, the G500 and G600, and the existing G650ER. Qatar Airways currently has more than 350 new aircraft worth more than US$90 billion pending delivery over the next few years. This includes orders for Airbus’ new generation A350s, A320 Neos, A380s, A330 Freighters, and Boeing 777s, Boeing 777Xs, Boeing 787-9s and has signed a Letter of Intent for 60 Boeing 737 MAX aircraft.

Qatar Airways has been declared the world’s largest carrier, the airline stated that its continued operations through the covid-19 pandemic crisis, has now secured them the top spot.

Qatar Airways operated over 15,000 flights that traveled a combined distance of over 50 million kilometers during the pandemic crisis.