Sitting in a packed plane cabin might seem a risky proposition during a pandemic, but a statistics professor says the actual odds of catching the virus while flying might be lower than you think.

Arnold Barnett, a professor of statistics at the Massachusetts Institute of Technology’s Sloan School of Management, says he has crunched the numbers to determine the actual likelihood of infection on a plane.

Prof Barnett’s study focused on two-hour flights in the United States and considered the benefit of an empty middle seat – a measure adopted by some airlines to maintain social distancing between passengers, CNN reported.

It also assumed everyone on board was wearing a mask, which is being increasingly enforced as policy by many carriers.

He found on an aircraft with three seats on either side of the aisle, such as a Boeing 737, the odds of catching the virus on a full flight was 1 in 4300.

“Most things are more dangerous now than they were before COVID, and aviation is no exception to that,” Prof Barnett told CNN Travel.

“But three things have to go wrong for you to get infected (on a flight): there has to be a COVID-19 patient on board and they have to be contagious. If there is such a person on your flight, assuming they are wearing a mask, it has to fail to prevent the transmission.

“They also have to be close enough that there’s a danger you could suffer from the transmission.”

Prof Barnett said the odds would be even lower on flights outside the US, which has the highest number of coronavirus cases in the world.

In terms of the choice of seat, he said there was little difference in safety between the window and middle seats but the aisle seat offered slightly more risk as there were more people around.

“You’re endangered by the people sitting next to you in the same row,” he told CNN. “And to a lesser extent, the people in the row behind and the row ahead.

“Statistically, the window seat is a little safer than the middle seat or the aisle seat on a plane that’s full. But it’s not a big difference.”

Globally, there are few known cases of COVID-19 transmission inside aircraft, according to a recent report by The Wall Street Journal.

A March 31 flight between the United States and Taiwan had 12 symptomatic passengers, but contact tracing found there was no on-board transmission among the 328 other passengers.

Similarly, a symptomatic passenger infected no one on a China to Canada flight.

However, it does happen – on a London to Vietnam flight on March 2, 14 people were likely infected by one person sitting nearby. 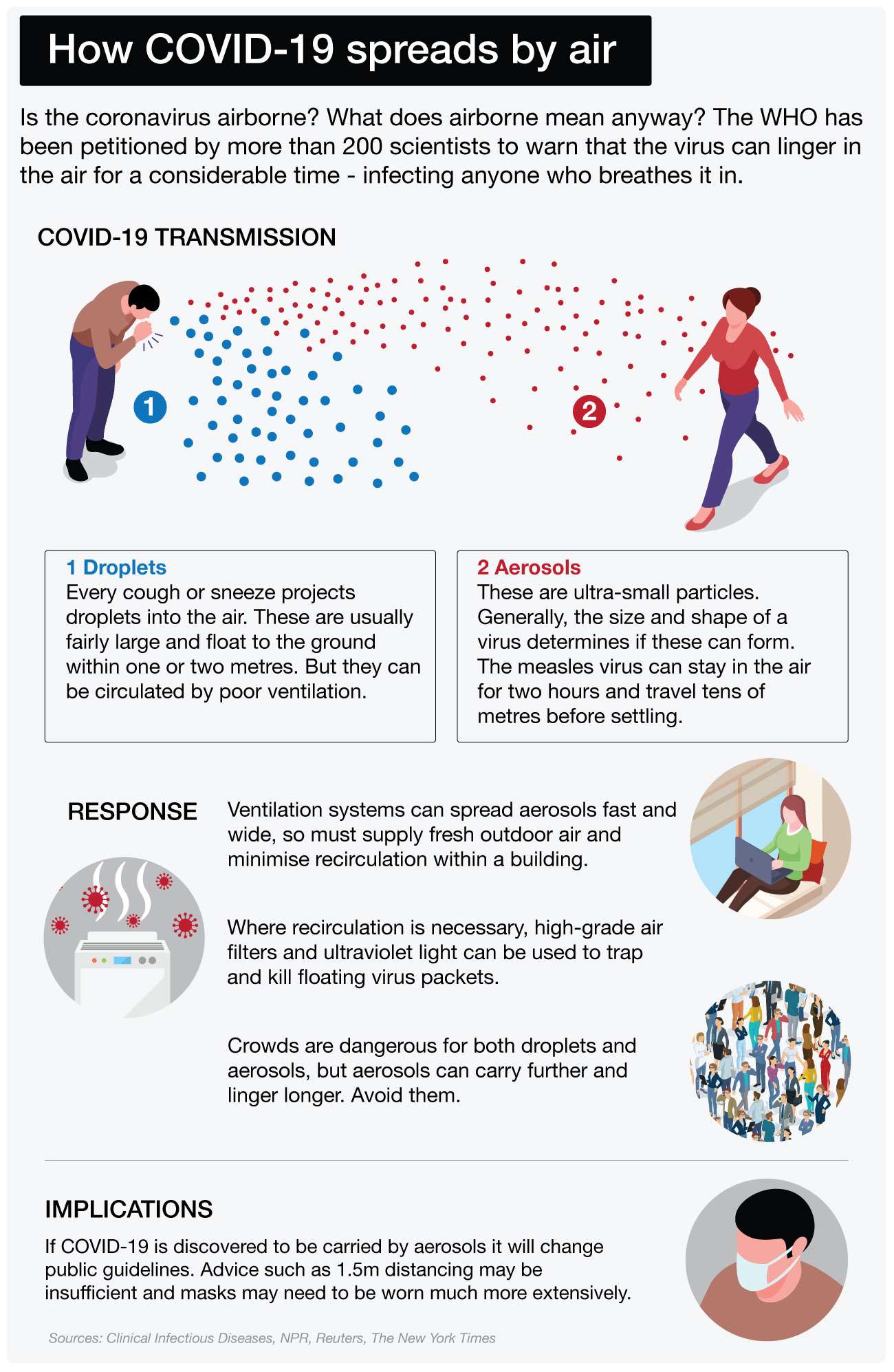 HOW DOES THE VIRUS SPREAD IN THE CABIN?

COVID-19 spreads from droplets from an infected person that are ingested through the mouth, nose and ears.

Ventilation systems on planes are believed to be very good at controlling the spread of small aerosol particles.

The air we breathe in the plane cabin is a 50-50 mix of outside air and recirculated air from inside the cabin, which has passed through hospital-grade HEPA filters that can remove at least 99.9 per cent of bacteria and virus particles.

The air on the plane may be completely replaced every 2-3 minutes, compared with every 10-12 minutes in an airconditioned building, according to the BBC.

“It is generally accepted right now that when the plane is in flight and the ventilation system is up and running, it does a really good job of clearing the air of infectious particles,” disease transmission expert Dr Mark Gendreau told The Wall Street Journal.

But the ventilation systems are less effective with handling large droplets, so experts believe the bigger risk on planes is from passengers coughing and sneezing nearby – which is why masks can be crucial.

However, a recent German study found it was not necessarily during the flight, but while boarding and deplaning, that passengers were most at risk of contracting COVID-19.

The study found that was because passengers were in even closer contact getting on and off the plane as they queued in aisles, looked for their seats and moved their bags in and out of the overhead compartment.

“Contrary to what people think, the hands are the way that these viruses most efficiently spread,” Dr Powell said.

“Top of the list is frequent hand washing, hand sanitising, or both.”