A Russian Air Force An-124 flew in to New York’s JFK International Airport on April 1st. The aircraft brought in much-needed medical supplies to the Big Apple after making some stops in Canada and Ireland. On arrival in New York, the tower thanked the crew for flying in the assistance and wished them a good day.

“The New York Air Traffic Controller thanked the Russian pilot when this plane with medical assistance for the US landed at JFK airport.

“Rome Foxtrot Foxtrot 8460 Heavy, we sincerely thank you for all the assistance you are bringing in,” the controller said. “Have a good day.”

#HappeningNow: Medical supplies sent by Russia  to the US will help local communities and hospitals in their crucial action against the spread of #coronavirus. #Solidarity against #COVID19. 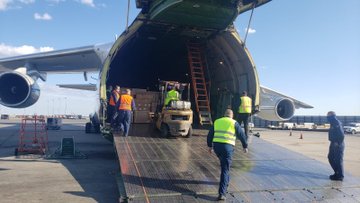 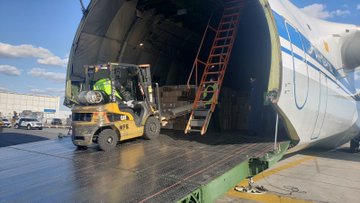 JFK Airport boasted some interesting arrivals on April 1st. Aside from this Russian aid flight, a Wizz Air Airbus A321neo operating a repatriation flight also made some stops at JFK Today.

The Antonov An-124 is a large cargo aircraft. According to the manufacturer, the aircraft took off for the first time ever on Christmas Eve in 1982. On board, the aircraft can carry up to 150 tons of cargo.

Other special features of this incredibly large aircraft include a kneeling feature that moves the nose of the aircraft closer to the ground. In addition, the aircraft has two doors– one in the front and one in the back to allow for easier loading and offloading.

On April 1st, 2020, the An-124 cargo aircraft made a special appearance at New York’s John F. Kennedy International Airport. The Russian Air Force aircraft was loaded with much-needed medical and humanitarian aid destined for the front lines in the fight against COVID-10 in heavily-hit New York City.